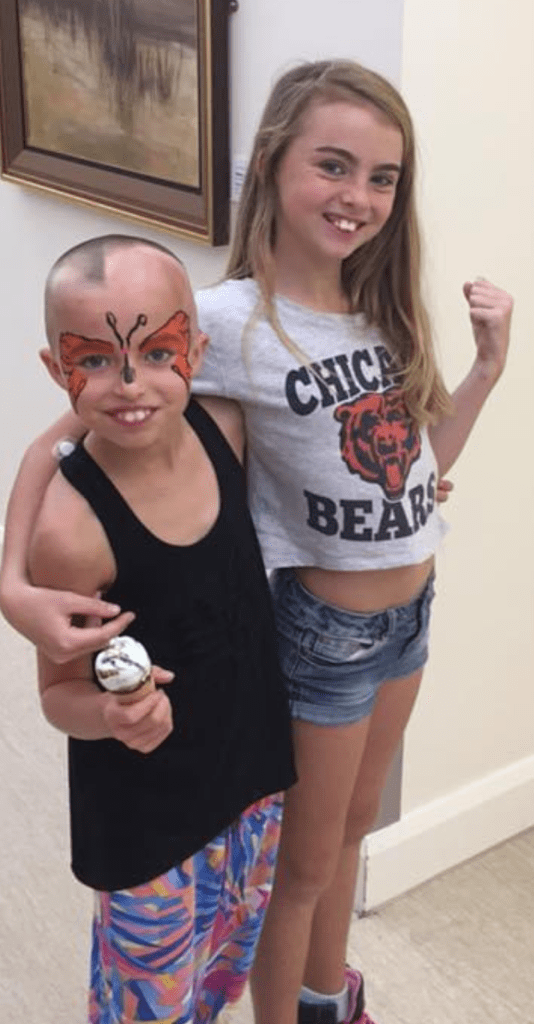 Hi. my name is Amelia, Milli for short as you probably already know. I am a kid with cancer which can be very daunting but I always seem to have a light at the end of the tunnel so here’s my survival story in my own words.

5th of December 2006 a baby girl was born to Monica Smirk and Grant Lucas with blue eyes and chubby cheeks. The cutest thing I’ve ever seen said my parents when they first met me. Amelia Wendy Lucas they called me and I was the Clayton’s kid as mum would call me as I only cried when I was hungry. Eat and sleep was my moto as my mum would say.

I was good girl growing up, can’t say the same about my siblings always mucking about but I still love em.

In 2016 I was about nine when I heard the news that I had cancer, I was as healthy as a horse except for the cancer in my brain, so we had a biopsy to find out exactly what it was then the operation to remove it.

We started on regular treatments, 30 days of radio and chemotherapy. I got rid of it for six months, and had another scan in April 2017 and it was back.

We were determined not to give up. We did our own research and found that there were many trials we could go on but on in particular caught our eye. It was a new trial that was going ahead and they were having marvellous results in America. It was a new radiotherapy trial called Proton therapy or cyberknife. We showed it to our oncologist and he said there was a better machine in Perth but it only had three patients that had been on it so my parents were a bit hesitant but they were willing to do anything so they said yes but only if the doctor in America and the radiation doctor here would work together and pin point the exact location in my brain to fry and the oncologist said yes.

There were three days of treatment, the first day the doctor brought us in his office and said “We are working together, we have pin pointed it exactly it is all ready to go.” We get home that night and the doctor in America rings us and says “Oh hi Monica just letting you know that the doctor in WA hasn’t contacted us here in America.” My mum was furious and that was the first and last time we got to meet the radiation doctor here in WA. We had to go back the next 2 days to finish the treatment, what sucks even more is that we were supposed to meet Taj Burrows that  September but unfortunately ‘cause of the treatment I was so sick that I couldn’t couldn’t surf.  Mum and dad got a script sent to Dunsborough so I didn’t feel sick anymore and I managed to get up and surf with Taj that day and they named Yallingup beach left as Millis left.

That didn’t work as you know so we had to try something new and different so we had a try at immunotherapy. It was a new trial that was going ahead, one of a kind research. My parents accepted the offer, on the list we went and the wait was anxious and unbearable for my parents. The trial started in November 2017 and finished in the January 2018. We had the worst Christmas and New Year cause I was so sick that I couldn’t get out of bed.

We did a scan in April to see if there was any progress but in fact it had doubled in size so they took me off the immunotherapy. They said they could not do anything and advised us to put me into palliative care.

Obviously we weren’t willing to give up so we sent the scan over to Dr Charlie Teo in Sydney Australia, he said he would operate. We had 4 days to find $50k we got a gofundme and my mum got in contact with channel 7. Thankfully u saved the day with ur remarkable support and we were able to fly to Sydney. Charlie removed 98% of my tumour which meant I needed further treatment.

My parents decided to take me to Germany on Charlies advice as they are 10 years ahead with oncology. We spent 4 weeks in Germany conducting alternative treatments along with chemotherapy. The treatments were curcumin, vitamin c, sodium bicarbonate IVs. In Germany I also had hyperthermia treatment to my brain. I came home still taking low doses of chemotherapy. My parents then found NIIM in Melbourne who would do the same treatment as Germany so over we went for another 4weeks of treatment the same as Germany except the high doses of chemotherapy in September 2019.

Since then I have been having alternative therapies and booked in another scan day for April 2020. The scan was not good news again for the third time and we still were not going to give up. Again PCH would not operate so we turned to the public for help again and managed to gain half of the operation. My parents lent the remaining funds, and off Dad and I went to Sydney during Covid 19 restrictions to see our angel Charlie again. This time Charlie was very worried about the outcome but he managed to get the whole tumour this time including my brain stem. I came home from Sydney 2 days after the op and currently are doing very well and back in alternative treatments.